Playback Theatre is an interactive form of improvisational theatre in which audience members tell stories from their lives and watch them enacted on the spot.

Playback Theatre was founded in 1975 by Jonathan Fox and Jo Salas. It has spread around the globe and Playback companies now exist on six continents. Playback Theatre is used in a range of contexts including public performances, community arts, social dialogue, peace building, conflict resolution, education, change management and celebrations. There are regular Playback gatherings and festivals in different parts of the world.

Playback Theatre is spontaneous – it is theatre created through a unique collaboration between performers and audience. Someone tells a story or moment from their life, chooses actors to play the different roles then watches as their story is immediately recreated and given artistic shape and coherence. Whether in the classroom, hospital, at a business conference or in a theatre, there is always the familiarity of this basic set-up for Playback Theatre.

This is the essential structure for a Playback Theatre performance. Each company may have some additional features, for example: a cloth ‘tree’ at the upstage right corner – a selection of coloured cloth draped over a rail or ladder which can be used in the action. Or upstage there may be a simple curtain on a rail to create a hidden area for the actors to use in the action. These are optional extras. 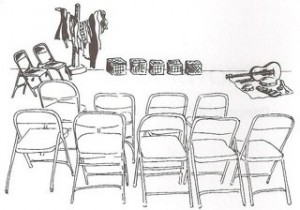 There is no script, but there is a rhythm and sequence to a Playback Theatre performance. The conductor is the host and facilitator of the process.

After a period of introductions and warming up, someone will volunteer to tell a story. It could be a short moment, or about a longer event. They may be past, present or future stories. They could be about a very special time or about something that happens everyday. In the course of a performance maybe 3,4 or 5 people will come forward to tell a story in this way.

The performers take this as their cue to set up for the beginning of the enactment. There may be music to set an atmosphere and mood; the actors may use their boxes or chairs to define the space. During the enactment, the actors and musician will spontaneously improvise a re-enactment of the story, and this may happen in different artistic forms. Whether as a naturalistic scene, or through abstract movement or sound, or as a dance, or with puppets and song (or a combination of these forms), the performers attempt to capture and present the essence and heart of the story.

At the end of the enactment, the actors look to the Teller as an act of acknowledgement. Then there is a closure with the Teller – an opportunity to say something more if they feel moved to. Sometimes nothing more need be said or perhaps a few words, sometimes the Teller is offered a chance for a correction or a transformation of the scene. And the actors will replay it accordingly. The conductor thanks the Teller who returns to their seat. And then another person is invited to tell the next story, and so on.

The simple rules of this process form part of the ritual that is an essential aspect of Playback Theatre.